NextThe Best Vegan Junk Food and How to Avoid It 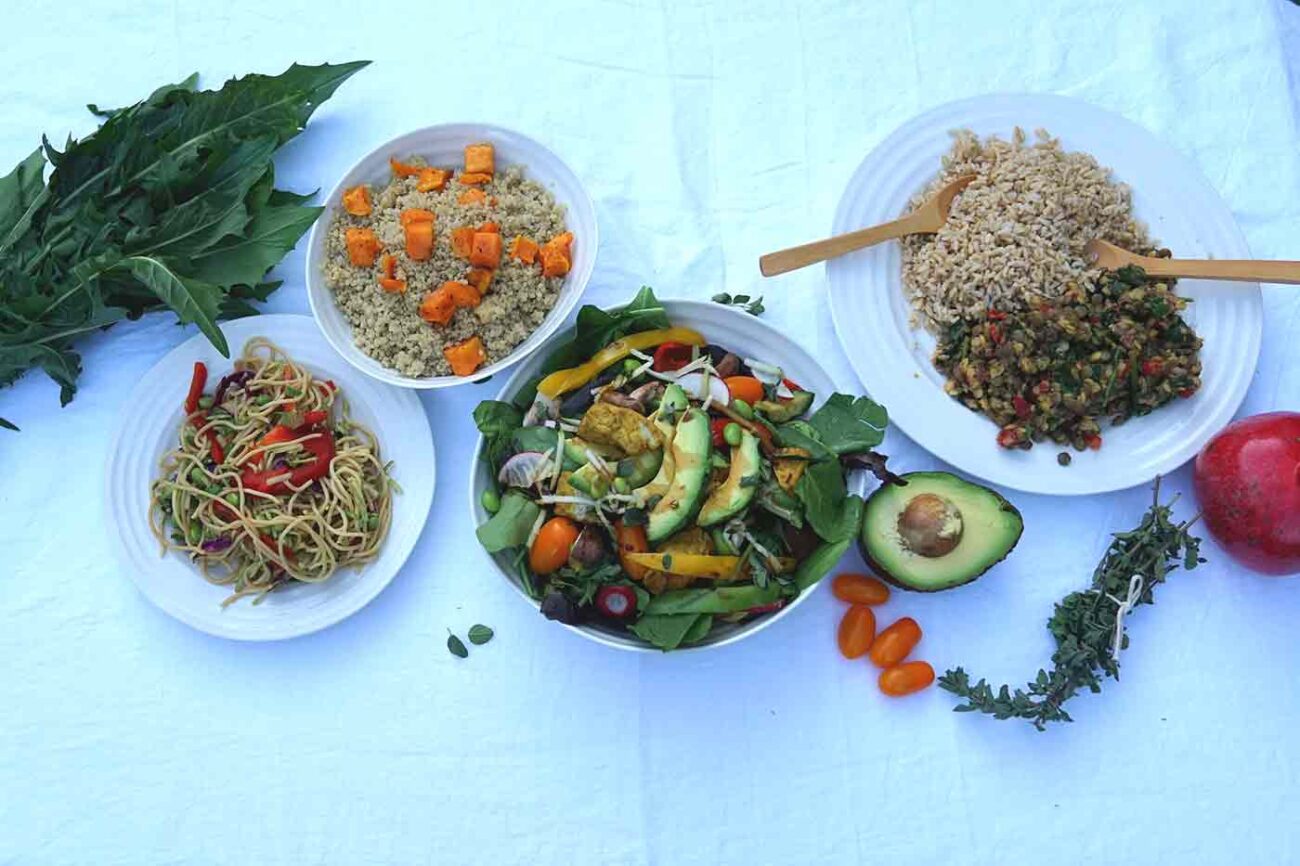 You’ve heard it before: most Americans don’t eat what they should, according to a government survey. But don’t fret, you can learn to eat healthy—even without meat, dairy and eggs—with a little patience, and good vegan nutrition!

“A person can be vegan and be very healthy,” said Walter Willett, a Harvard professor and, until recently, the longtime chair of the university’s Nutrition Department. He emphasized that vegans need to be sure to get B12 in a supplement or from fortified foods.

There are even health benefits to going vegan, such as eating less heart-clogging fats from meats. Vegans also often get more vitamin C, folate, fiber, and iron.

Read on for expert tips on vegan nutrition. And for the best advice, talk to your doctor!

Because vitamin B12 does not exist in plants, everyone interviewed stressed the need to get it in a vitamin supplement or from fortified foods, such as some soy milks. Check product labels to see if it’s added.

Your body uses B12 to make blood cells, nerves and DNA. The U.S. RDA is 2 micrograms, or mgs, which you can get from a glass of fortified soy milk. Some experts recommend taking more since B12 in supplements is harder to absorb, and there is no known healthy limit to the amount you should get.

Whether you eat meat or not, you could have serious problems if you don’t get enough B12: tingling fingers, anemia, depression, impaired thinking, even permanent nerve damage in the most extreme cases.

All B12 supplements are vegan.

Vegan protein seems like it’s at the top of everyone’s list of questions about going vegan: how much do I need, and how can I get it? The answers may surprise you!

Experts recommend .36 grams of protein per pound of body weight. Someone 160 pounds would need about 58 grams a day.

A meat-eater gets all she needs in just one eight-ounce steak, a single entrée. But protein is less concentrated in plants; you would need a 14-ounce container of tofu to eat the same amount.

More likely, you’ll want to eat protein in different foods throughout the day, and some experts say our bodies absorb it better spread out this way.

“Vegans will get adequate protein if they eat several servings of legumes, nuts, or soy products per day along with other healthy whole foods,” said Willett, author of Eat, Drink and Be Healthy: The Harvard Medical School Guide to Healthy Eating.

“Of course, it is also possible to eat unhealthy vegan diets, mainly based on refined starches and sugar,” said Willett, who recently appeared in the documentary “The Game Changers”.

Proteins are made of building blocks called amino acids, different kinds of them, and experts recommend you get them all. Some your body makes, while others you need to get from foods.

Some foods, such as tofu, and meat, have all the amino acids you need from foods.

Others foods are complementary. You can eat grains (whole-grain bread, pasta, brown rice, oatmeal) combined with nuts or legumes (beans, lentils) within the same day to get a balance.

Protein, which helps build strong muscles and more, is actually in almost everything we eat: especially peanut-butter toast, black-bean tostadas, even broccoli.

“Protein is probably America’s favorite nutrient,” said Fetter. “In general people don’t think they get enough protein, when in reality some of us get plenty.” 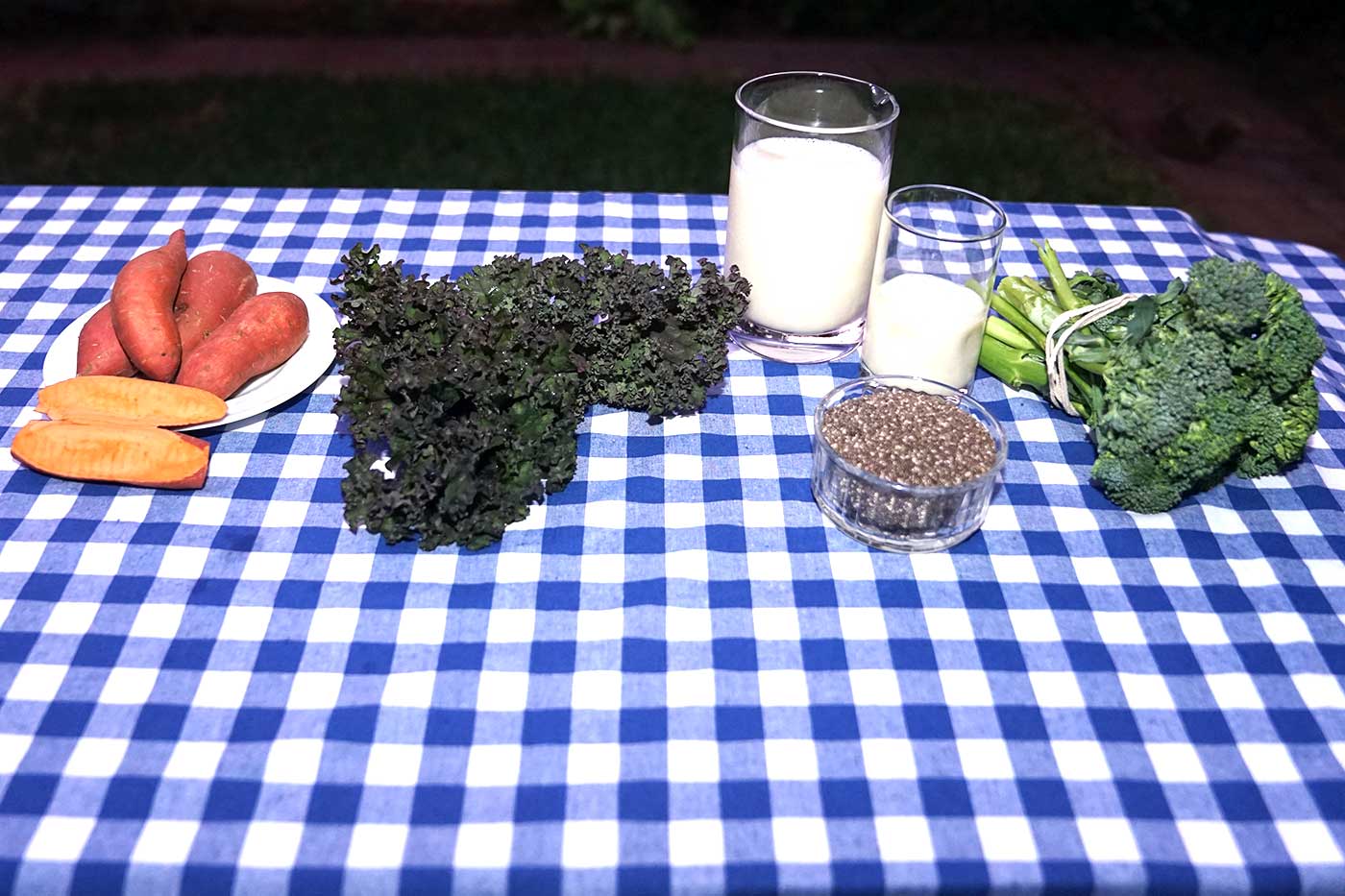 Vegan calcium is easy to get in broccoli, sweet potatoes, kale, chia seeds, nuts and of course fortified soy and other milks.

Like with Protein, it makes sense for vegans to think about calcium, but not to necessarily worry about it. Calcium is in more foods than you realize: sweet potatoes, kale, broccoli, chia seeds, nuts.

“Broccoli is one of my favorite sources of calcium,” said Fetter. “It’s very easy to meet our calcium needs with a lot of these non-dairy sources.”

You should get at least 500 milligrams a day of calcium, according to the World Health Organization. If you eat tofu processed with calcium (check the label), a half cup can have 861 milligrams. A cup of soy milk has 300 milligrams, plus what’s in other foods you’re eating.

This amount recommended by the WHO is lower than that of the U.S. Department of Agriculture, which suggests people get 1,000 milligrams up to age 50 and 1,200 at age 51 and older. Willett of Harvard also recommends less Calcium than the USDA.

You can get too much calcium from supplements, say experts. If you take in more than the maximum recommended 2,500 milligrams, it can increase your risk of kidney stones and heart disease, according to the National Institutes of Health.

Check the label if you want to take a calcium supplement and are looking for one that’s vegan. And if you do take one, do it between meals, since all that calcium at once can make it harder for your body to absorb other nutrients.

Vitamin D helps your body absorb calcium and promotes muscle and bone strength. Without enough you can get also get the blues.

Yet vitamin D isn’t something vegans or meat-eaters can get from unfortified food. That’s why it is added to milk, including some soy milk.

This is not an ideal way to get enough, however, since a cup of milk only has 100 IU—short for international unit—of vitamin D, but experts recommend six to eight times that, or more. This translates to 640 calories from unsweetened soy milk or 880 calories from regular milk every day!

Alternatively, vitamin D is something your body makes on its own, as long as you get 15 minutes of midday sun. But if you live in San Francisco or Philly or farther north; if you cover up to avoid sun; or if you have dark skin, you likely don’t get enough vitamin D, according to experts. In these cases, they recommend taking a supplement.

You can look for a supplement labeled D2, which is vegan, versus D3 made from animals.

Harvard is higher based on its research.

The most you’re supposed to have, called the upper limit, is more than four times that. If you regularly exceed it, the excess can cause kidney and heart damage, according to experts. 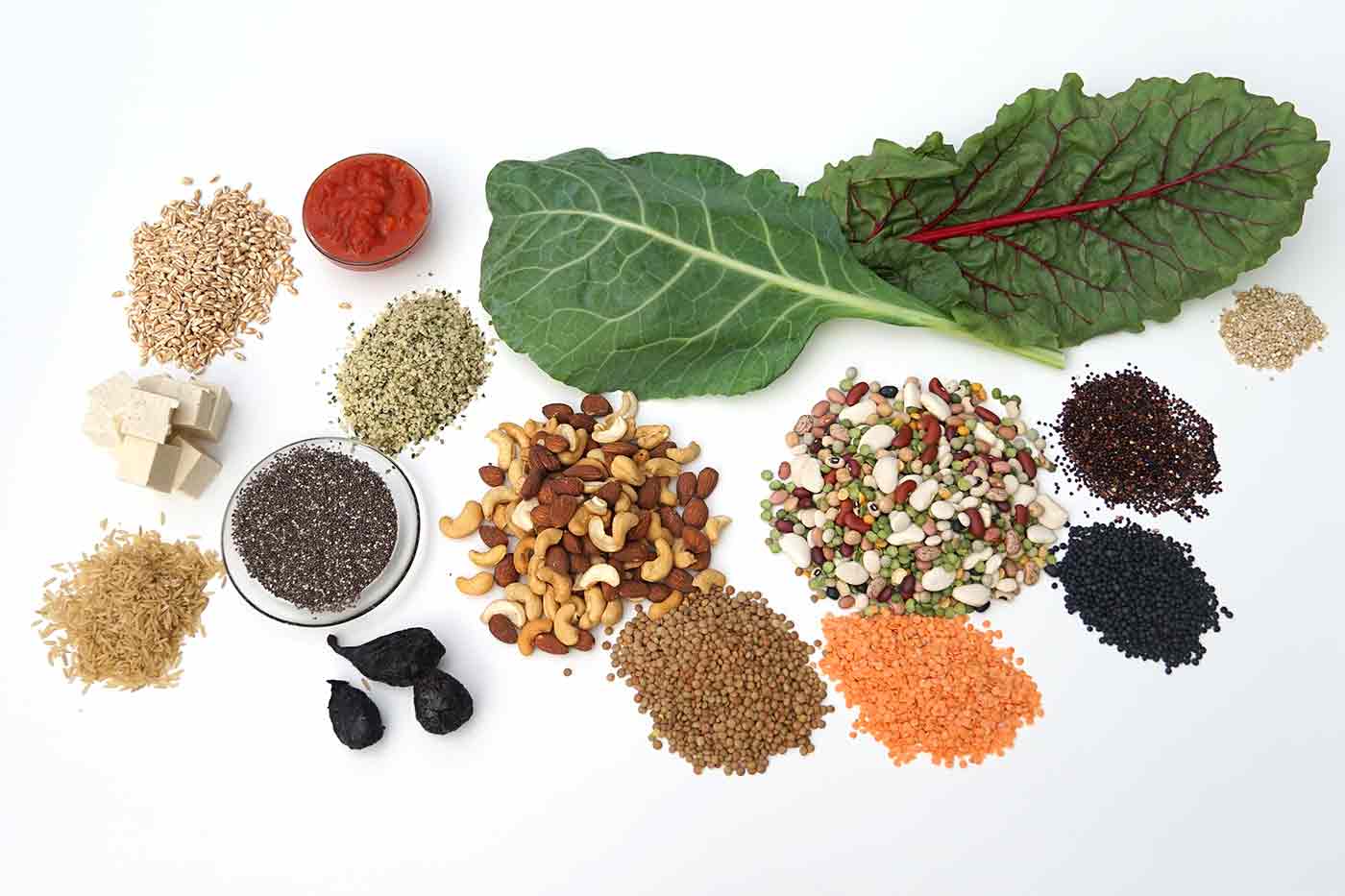 Vegan iron is harder for your body to absorb, but eating foods high in vitamin C—such as citrus, kale, broccoli and bell peppers—in the same meal helps.

If you eat a lot of calcium all at once, like from a supplement, consider eating it between meals, because calcium can limit how much iron you can absorb. Coffee and tea can also have the same effect if you drink it during or after a meal. And consider toasting nuts to make the iron they contain easier to absorb.

Your body needs iron to make red blood cells and hemoglobin that moves oxygen through your body. Women need more because they lose it monthly with their periods. The government recommends 18 mg for this group and just 8 mg for men and post-menopausal women.

The maximum amount of iron you should get is 45 mg a day for adults. 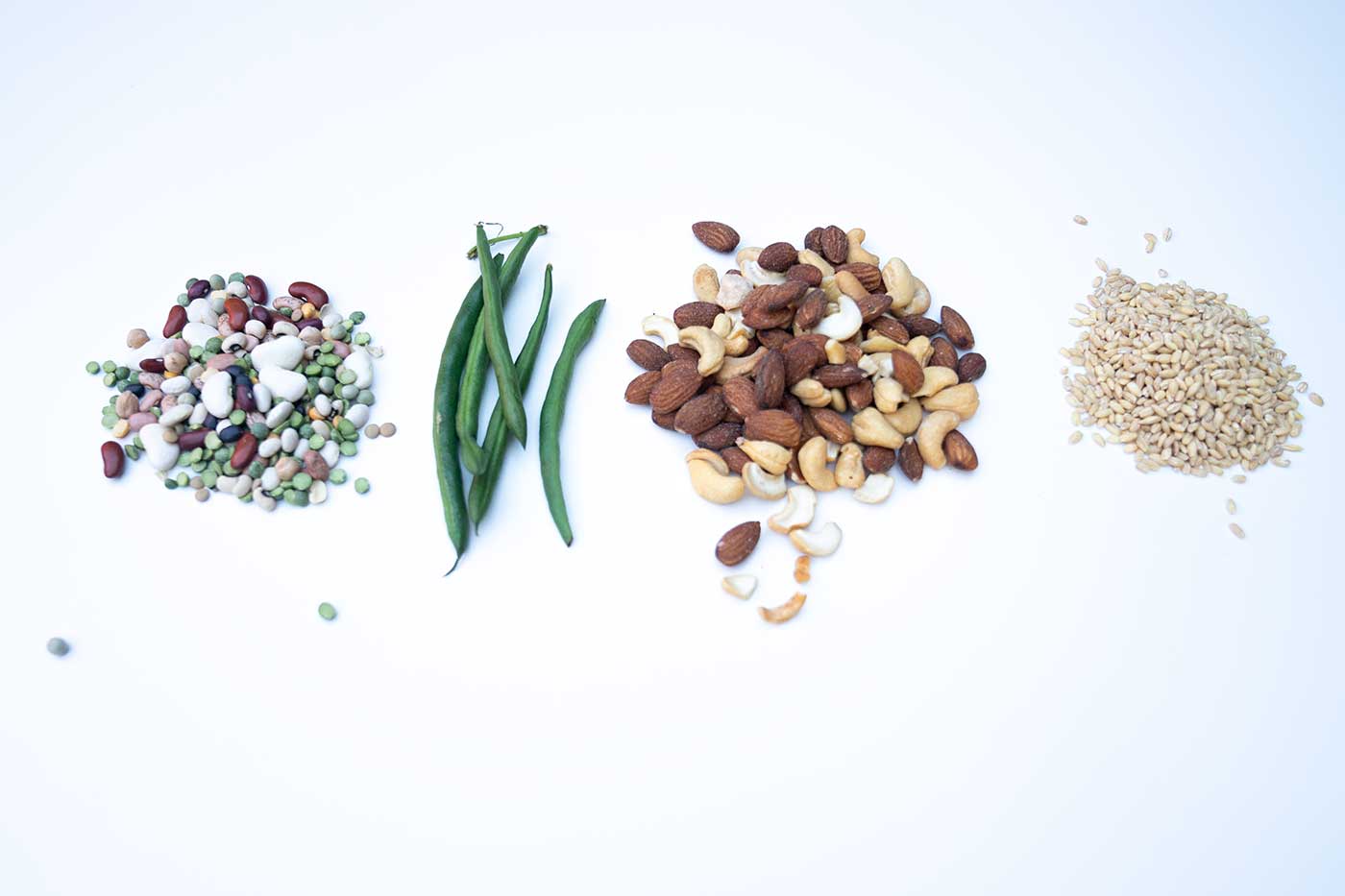 Vegan zinc is plentiful in beans, such as dried beans, and French green beans, nuts and whole grains such as barley.

Zinc helps your body fight illness, and produce protein and DNA. It’s very important. Fortunately most people in the U.S. get enough of it. Beans, nuts and whole grains are good vegan sources.

The recommended daily dose of zinc is 11 milligrams for men and 8 milligrams for women. Like with iron, the zinc in plant foods can be harder to absorb, so adopt the same tactics as above if you want to be carful about getting as much as possible.

Your body uses iodine to create hormones that power your metabolism. The recommended dose is the same for men and women: 150 micrograms a day.

Unfortunately, it can be very difficult to get enough naturally occurring iodine from foods, for both vegans and meat eaters.

One way to get around the problem is by eating iodized salt, which has an iodine supplement added in. Another is to just avoid all that salt and take a supplement.

You’d need to get a half teaspoon of iodized table salt, or 2,325 milligrams of sodium, to get enough iodine from iodized salt. That’s just under the healthy limit of sodium and doesn’t include all the salt you may be getting from prepared foods. This salt usually isn’t iodized.

In short, you could get too much salt but not enough iodine.

If you want to take a supplement, look at the label if you seek a vegan one. The upper limit for iodine is 1,100 micrograms for adults.

Certain veggies—soy, cabbage, cauliflower, broccoli, kale and Brussels sprouts—stunt your body’s ability to absorb iodine, but only if you don’t cook them, and only if you eat very large amounts in the same meal. Vary what you eat, and consider cooking your kale. 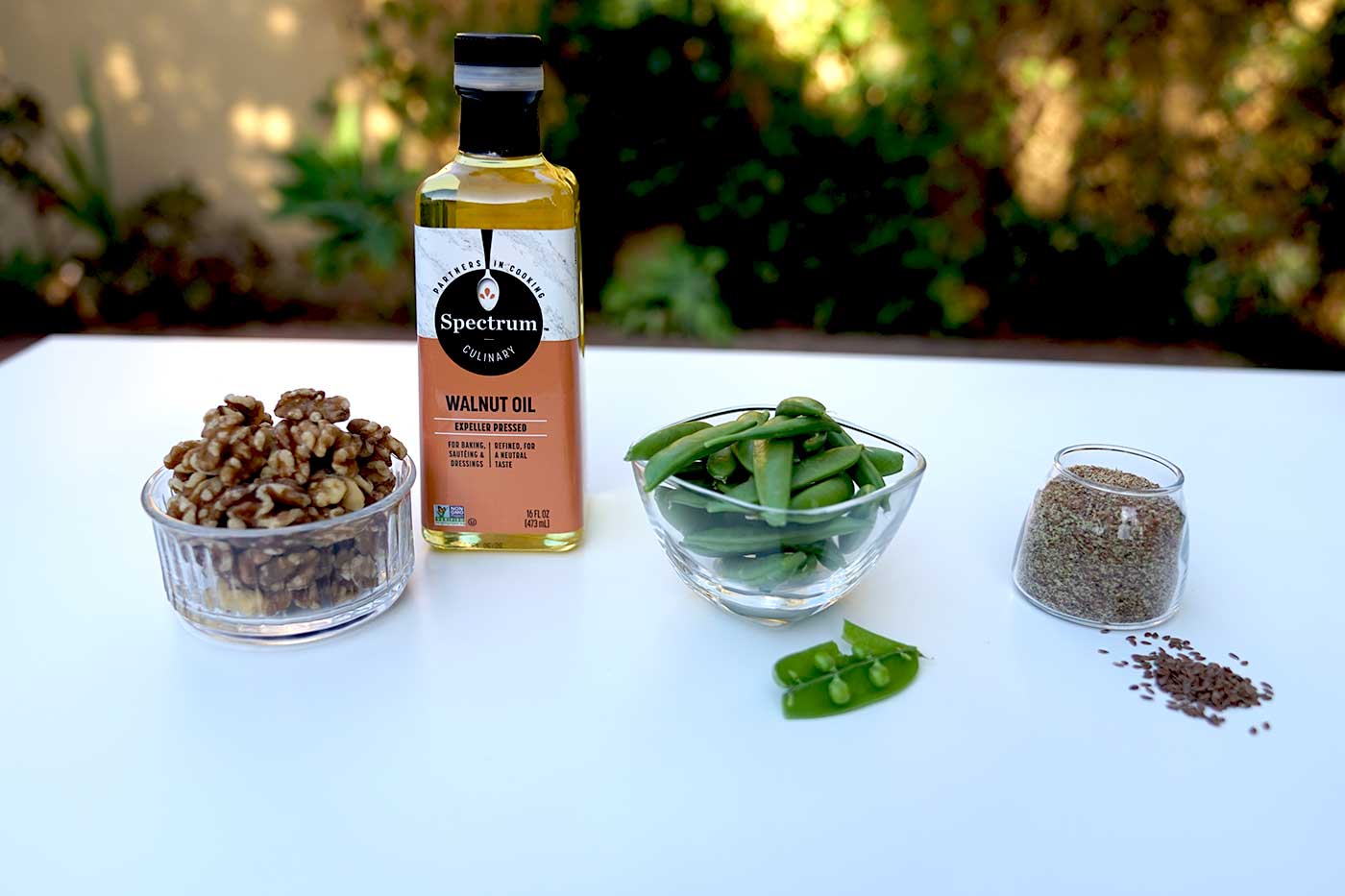 ALA is an omega-3 fatty acid. Among other things, it helps prevent heart disease and strokes.

The recommended daily allowance is 1.1 grams for women and 1.6 grams for men. To get that, you can eat ground flaxseed, walnut oil, walnuts, cooked soybeans. 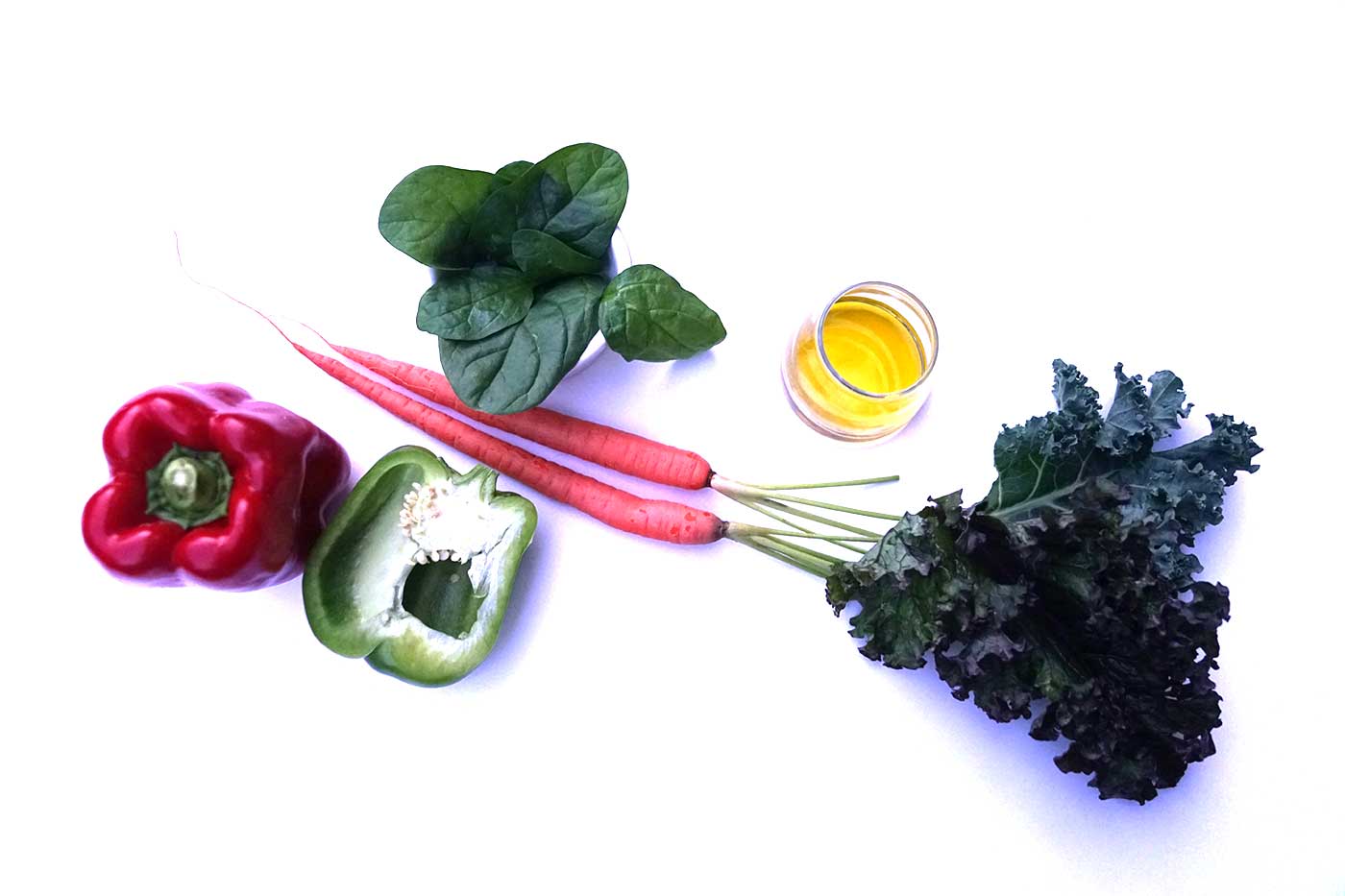 It’s easy to get vitamin A in foods such as carrots, green and red peppers, spinach and kale.

This important vitamin works to help your cells and eyes work well, and so much more. As a vegan, your body is converting substances such as beta-carotene and alpha-carotene into vitamin A. Green and red peppers, carrots, spinach, kale and other leafy greens offer what you need. Your body absorbs these provitamins best if you eat these foods with some fat, such as olive oil dressing or marinade.

You can also get a summary of current nutrition recommendations from the U.S. Department of Agriculture in its interactive calculator. The tool takes into account your weight, age, activity level and more. It’s helpful but very detailed, and there are only certain nutrients listed above that you may need to focus on. Talk to your doctor to be sure!

“If you decide to go with this lifestyle, you have to have a plan, you have to do your research to make sure you’re getting enough of what you need,” said Aleida Gordon, a lecturer with the Department of Nutrition and Food Science at Cal Poly Pomona.