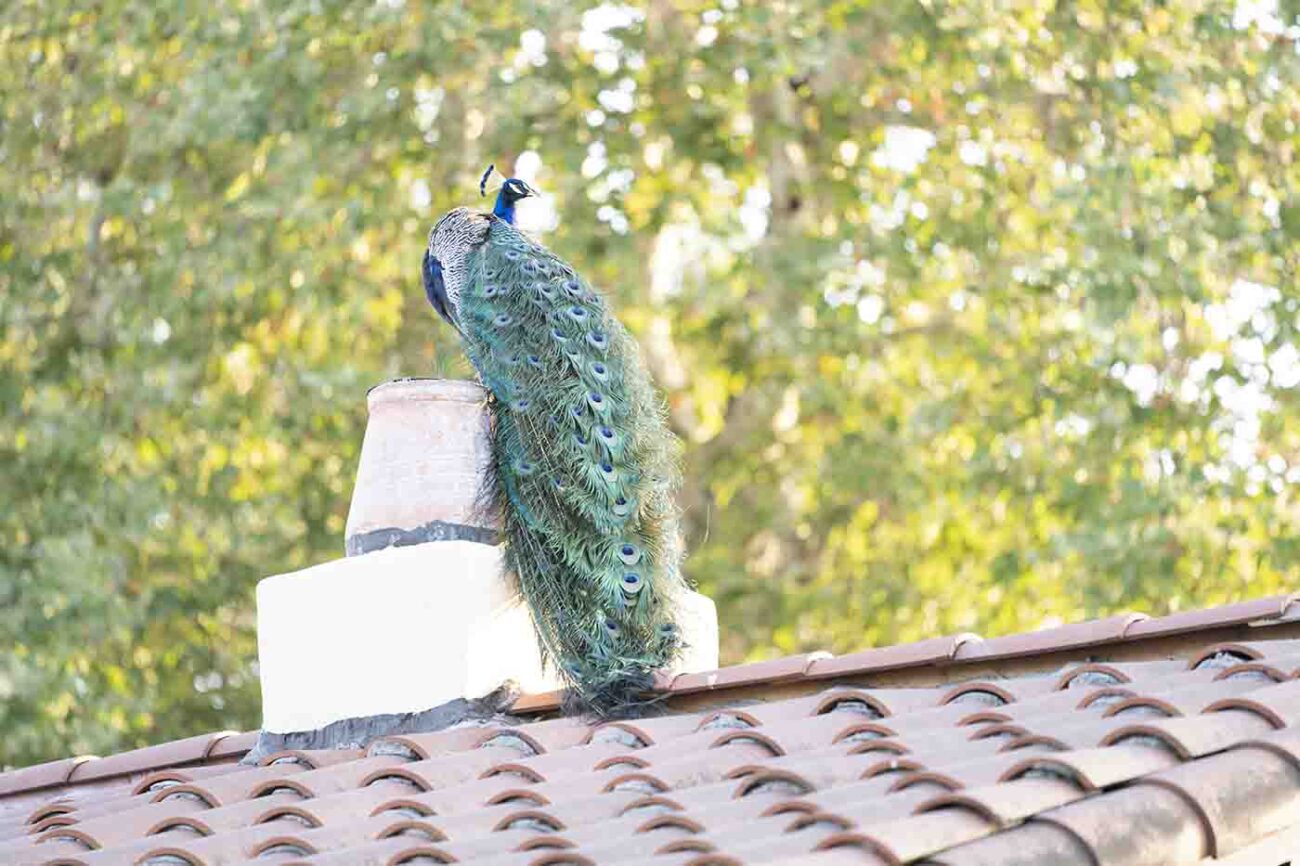 The first peacock visited more than 10 years ago. At the time, my dog nearly crashed through our living room window to get to it, and the bird seemed to also be watching us through the panes. 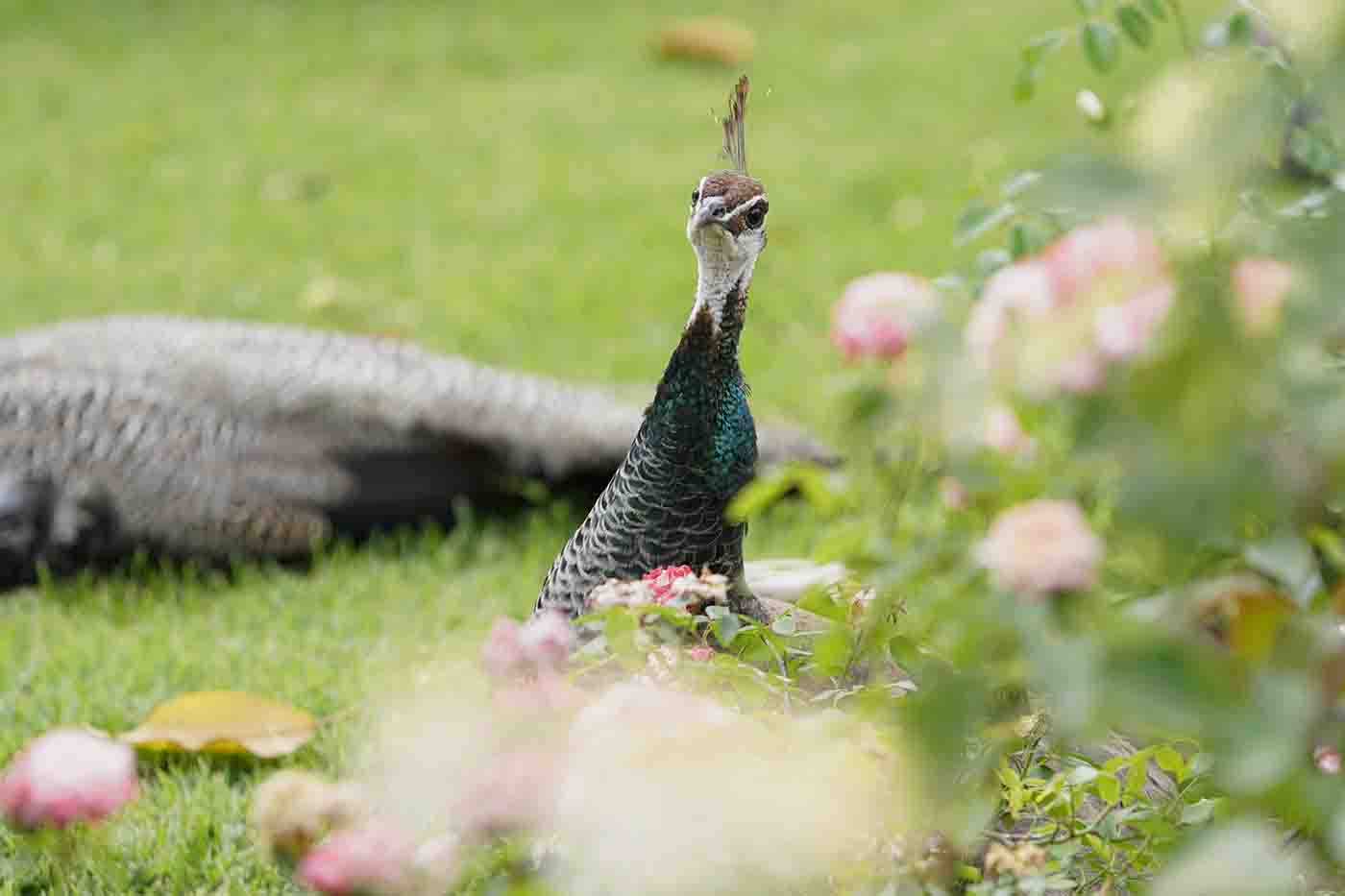 It was a long time after that, as I remember, until we saw another, and then suddenly there were many: peacocks, peahens, and their chicks. Every day. 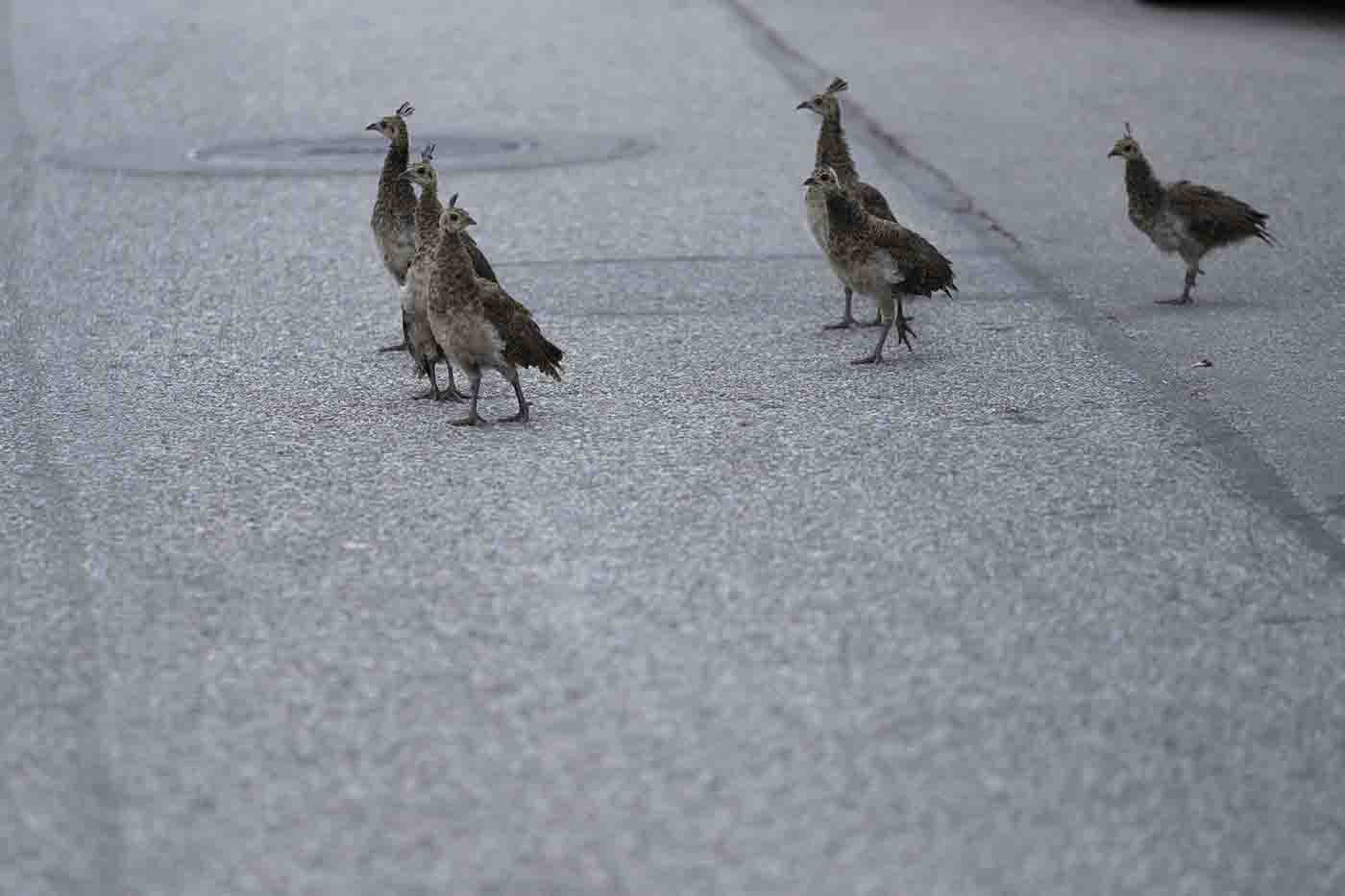 They had made their way for years from the Los Angeles County Arboretum four miles away, all descendants of a few pairs of Indian peafowl imported more than 100 years ago by entrepreneur Elias Jackson “Lucky” Baldwin. Today the 127-acre park is what's left of his 63,000-acre rancho.

Humans have imported the regal birds from foreign lands until they have naturalized and multiplied—in communities from Southern California to Coconut Grove, Florida. In a suburb of Toronto, Canada, one man grew so frustrated with the volume of their waste and midnight cries that he risked a hefty fine to chop down a large tree where they roosted. The determined birds promptly moved to his rooftop.

Though they may look like exotic pets, peafowl are wild animals that fend for themselves. Nobody officially feeds or takes care of them at the L.A. Arboretum, according to park naturalist Frank McDonough. They are a draw, however, for the nearly half million annual visitors, many who come to admire the hundreds of birds. I know they were a highlight of visits for me and my family when I was growing up, and I think seeing so many of these and other animals up close eventually inspired me to go vegan as an adult. 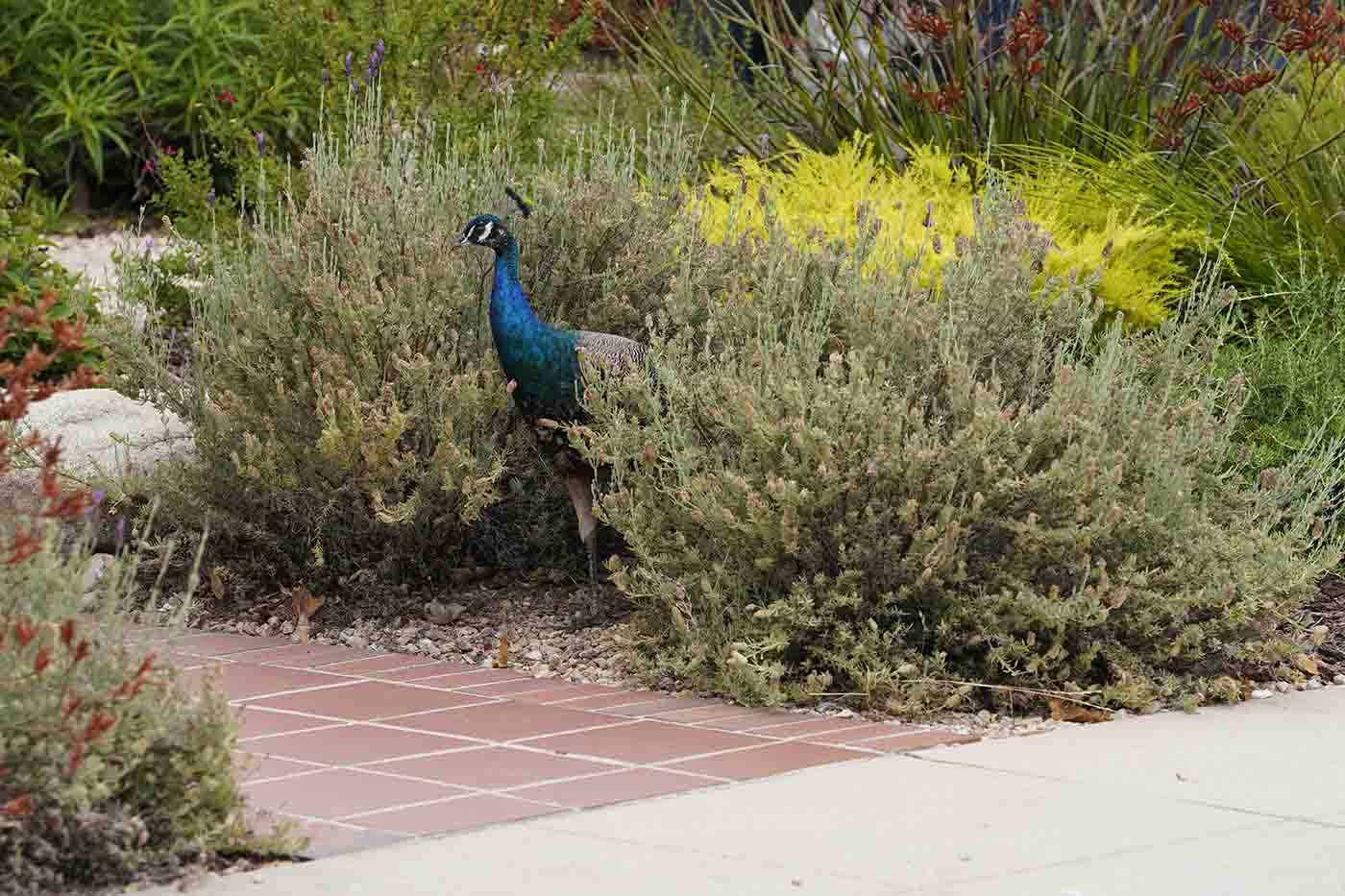 Their technicolor plumes also attracted biologist Roslyn Dakin, who has spent 2,500 hours studying peacocks, including two seasons at the Arboretum. She worked with a team to understand why male peafowl evolved with such large trains that seem more of a handicap than an asset for survival.

By covering the colors in their feathers with stickers, the researchers found that birds with the “showiest, most iridescent blue-green patches in their eyespots mated the most often” said Daikin, now an assistant professor at Carleton University in Ontario, Canada.

“I was always impressed with their social and communication skills and at how sophisticated their social lives are,” Dakin said. “Outside of the breeding season, they move in small family groups. After breeding, the mothers occasionally care for another female's chicks. They recognize each other's appearance and calls, and adults that are bonded will even groom each other.”

Since they arrived at my home, the birds have crisscrossed the streets in our small neighborhood of Pasadena, California—one clawed foot at a time, stretching their necks and bobbing their heads with every deliberate step.

They block traffic with bodies as big as cats, taking no notice of the cars stacking up behind them. They thrive on the irrigation we have added in this desert, the water from our sprinklers and the fruits and seeds from our trees that feed them. And in return they force us to slow down and pay attention. 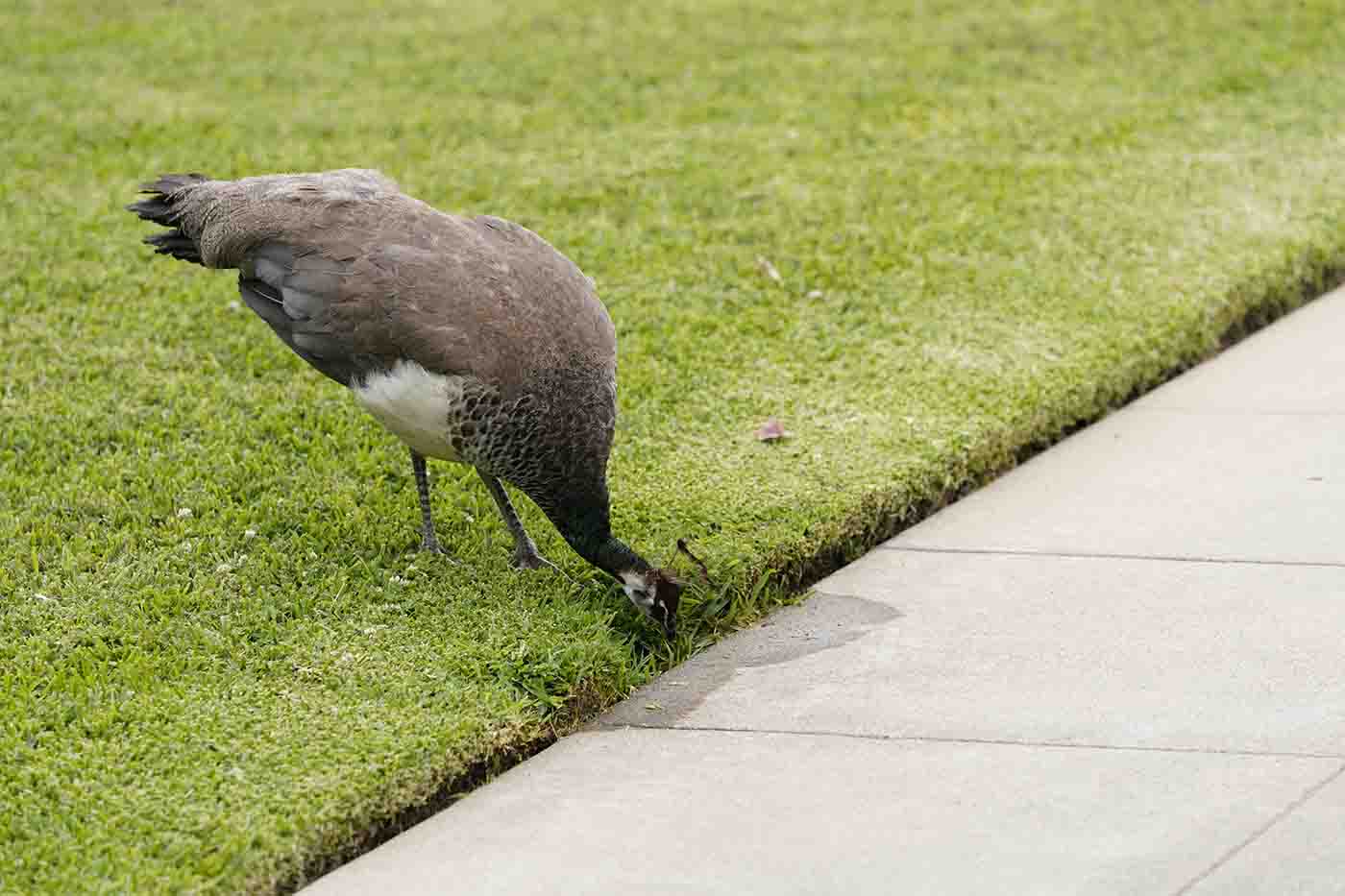 At night, they nest together in giant trees or on roofs. Nighttime calls come at 2 a.m., I’ve noticed, but these are distress signals because of a perceived threat, Dakin said. Mating calls only happen during the day.

“My favorite call that they use is the funny “hoot” or whine that the males make whenever they attempt to mate with a female—it may warn her of what is about to happen, giving her a chance to decline, but it also seems to convey to other females in the region that this particular male is worth checking out,” she said. “We did some experiments to test whether females are attracted to the sound of (attempted) sex, and they are.”

The peafowl is a pheasant and a relative of chickens and turkeys in a family called Phasianidae, heavy birds that spend most of their time on the ground. Peacocks can leap up and fly short distances.

Though they have natural beauty, and they bring an air of magic to the suburban community, they are not easy neighbors and are the subject of complaints on the social media site Nextdoor.

“It's flat-out awful,” said one woman who had counted 19 living in her block. She hadn't slept for over 2 years, she said. I did personally eventually learn to sleep through the early morning screeches.

The local Pasadena Humane Society gets involved when they get calls about injured wildlife, including peacocks.

“People either love them or hate them. I think they're very polarizing,” said Lauren Hamlett, wildlife manager of the society, which saw 21 injured or abandoned peafowl last year, down from normal due to a virus experts believed was infecting the population. The birds have since been given the all clear, and the animal welfare agency can begin treating more of them again. “They'll peck on people's cars, poop in people's yards. But especially at the Arboretum and in Arcadia, people will do anything for them. They're part of the community.”

Sometimes concerned fans try to rescue birds that should be left alone, especially based on expert guidance on how to treat hatchlings, she said. Peacock chicks can usually take care of themselves, even right after they hatch.

Despite their quirks, I do love these little dinosaurs, as some people call them. To me they make my suburban neighborhood seem magical, with eyes on the peacock plumes a thing of mythology, all-seeing, a symbol of joy and creativity, or vanity.

“I think it's fascinating how peafowl have spread around the world thanks to their extreme beauty. They have been introduced to hundreds of locations around the globe, and they thrive and grow because we protect and feed them,” Dakin said. “All of this success is because of beauty, evolved thanks to the peahen, but that now works very well on us humans, too.”